a revolutionary film about a country in revolution

by Deirdre O'Neill and Mike Wayne

Listen To Venezuela is a film that has been made in the tradition of radical Latin American documentary. This tradition emerged in the 1960s in the context of the 1959 Cuban revolution and the subsequent wave of revolutionary struggles against the Latin American oligarchy and US domination. Film became a weapon in the political struggle, but a critical, interrogatory and sophisticated weapon, supported by an intellectual culture generated by the filmmakers themselves through a variety of manifestos and essays. The Latin American documentary broke with the social democratic model dominant in the west, and aligned itself with the struggles of the workers and peasants. The dialectical image was (re)born through this committed, aligned filmmaking from such people as Santiago Alvarez, Fernando Solanas and Octavio Getino.

The dialectical image is characterised by its ability to speak of social and historical processes, make connections between things and articulate contradictions and conflicts.
It does this frequently in an act of recovery, against the draining away of the social and historical, the social connections and the contradictions of life which is the hall mark of mass culture. The method of the dialectical image is various, but it generally involves composing images, or the relations between images and/or the relations between sound and images in such a way as to produce disjunctures and contradictions of meaning. This disjuncture opens up the space for critical thought and transformation, a re-organisation of pre-conceived ideas as the viewer works to identify and decode the social forces at work in the image at specific historical moments.

The dialectical image has its roots further back in time, in the film work of revolutionary Russian filmmakers such as Sergei Eisenstein, whose theory of film montage stressed the importance of shocking the viewer into new emotional and intellectual responses, and Dziga Vertov, whose theory of montage explored new perceptions opened up in the space between shots. But for the dialectical image to work, it needs to be part of a general dialectical film structure, and not an isolated moment. There are many examples of such isolated moments of dialectical awareness in mass film culture, but they cannot be developed by the film or the spectator because the potential of such moments is quickly closed off and reintegrated into dominant ideologies.

For example, in King Kong (Peter Jackson 2005), the film opens with scenes of the mass poverty caused by the Great Depression. We see the shanty towns that sprang up in New York’s Central Park and this is juxtaposed with a song (contemporary to that era) from Al Jolson, called ‘I’m Sitting On Top Of the World’. This song provides an ironic juxtaposition between the utopian claims of the lyrics and the reality of hunger and homelessness for many people after the Wall Street Crash in 1929. We also see images of people who, despite the crash, are still sitting on top of the world: the rich. So the song provides an ironic and critical counterpoint to this image as well: the song’s utopian theme becomes a comment on the selfishness and indifference of the rich. But fairly quickly, the critical dialectical friction being generated by these images and this soundtrack, is neutralised as the film succumbs to racial and imperial myths deeply embedded into western culture.

The dialectical image does not necessarily require fancy editing to bring it about, especially in a context such as Venezuela, where a revolutionary dialectic is already happening. The dialectical image can be made within the composition of a single shot. In the chapter on education, Listen To Venezuela focuses on the Bolivarian University, a revolutionary university set up by the government in 2003, to provide education to the poor majority who have been excluded from university level education by the elite universities. 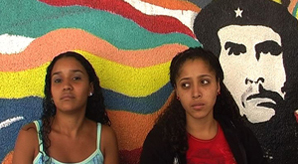 This image is a dialectical one. In it it these young women from the barrios, talk about how the revolution and the university have opened up the chance to study for degrees, a chance that would have been once denied to them. Behind them is a rainbow version of the famous iconic image of Che. This image has now achieved a kind of mythical status, endlessly recycled in many settings, some of them far removed from the revolutionary aims of Che Guevara. It is in short an image that has been almost removed from its historical and political moorings. In addition, Che has acquired certain associations connected with the image of the guerilla fighter, a romanticisation of the macho fighter and of political violence and sacrifice. What our image does is to bring that iconic image back down to earth and (re)connect Che with some of the concrete aims of social transformation and widening of horizons and possibilities that he was fighting for. These young women are the direct beneficiaries of a long continent wide struggle in which Che played an important part.

This site uses cookies. By continuing to browse the site, you are agreeing to our use of cookies.

We may request cookies to be set on your device. We use cookies to let us know when you visit our websites, how you interact with us, to enrich your user experience, and to customize your relationship with our website.

Click on the different category headings to find out more. You can also change some of your preferences. Note that blocking some types of cookies may impact your experience on our websites and the services we are able to offer.

These cookies are strictly necessary to provide you with services available through our website and to use some of its features.

Because these cookies are strictly necessary to deliver the website, refusing them will have impact how our site functions. You always can block or delete cookies by changing your browser settings and force blocking all cookies on this website. But this will always prompt you to accept/refuse cookies when revisiting our site.

We fully respect if you want to refuse cookies but to avoid asking you again and again kindly allow us to store a cookie for that. You are free to opt out any time or opt in for other cookies to get a better experience. If you refuse cookies we will remove all set cookies in our domain.

We provide you with a list of stored cookies on your computer in our domain so you can check what we stored. Due to security reasons we are not able to show or modify cookies from other domains. You can check these in your browser security settings.

We also use different external services like Google Webfonts, Google Maps, and external Video providers. Since these providers may collect personal data like your IP address we allow you to block them here. Please be aware that this might heavily reduce the functionality and appearance of our site. Changes will take effect once you reload the page.